Orwell: Keeping an Eye on You

Orwell: Keeping an Eye on You is a narrative game unlike anything I’ve ever played before.

Created by Osmotic Studios, a small indie game studio based in Germany, Orwell examines a world where the government is always watching.

You play as the very first human researcher on a surveillance system known as Orwell and truly feel like you’re Big Brother.

Shockingly, on your first day at the office, a bomb goes off in a busy public space. It’s time to put all your training to use and figure out who set it off!

Solving this mystery takes more than just clicking where you’re instructed to.

You need to make educated decisions. Some decisions are based on how you interpret the data you find and are presented with. Each choice matters.

So make sure you’re choosing right… because there are consequences for each one.

Day one gives us a suspect: Cassandra Watergate. Blue-haired artist with a criminal record.

Over five days, you make choices and go through a whirlwind adventure to stop a terrorist organisation. Or are they just a philosophical group with no terrorist intentions? You decide.

The concept of the government spying on its citizens has been around since 1949, when legendary dystopian author, George Orwell, wrote 1984 about the risks of a totalitarian government. Orwell warned of the dangers of this… and Orwell the game shows it first hand.

The other link this game made me think of was Person of Interest; a show following a group of people trying to stop bad things before they happen through the use of The Machine – a 24 hour surveillance set-up. Side note: You definitely need to watch this show, it’s amazing!

Person of Interest, yet again, shows the dangers of the government always watching, but at the same time, what good can come out of it.

But does that good outweigh the evil? That’s what Orwell is designed to make you think about.

Osmotic Games explore the idea of totalitarian government in a new media style, giving us an intriguing, thought provoking game. 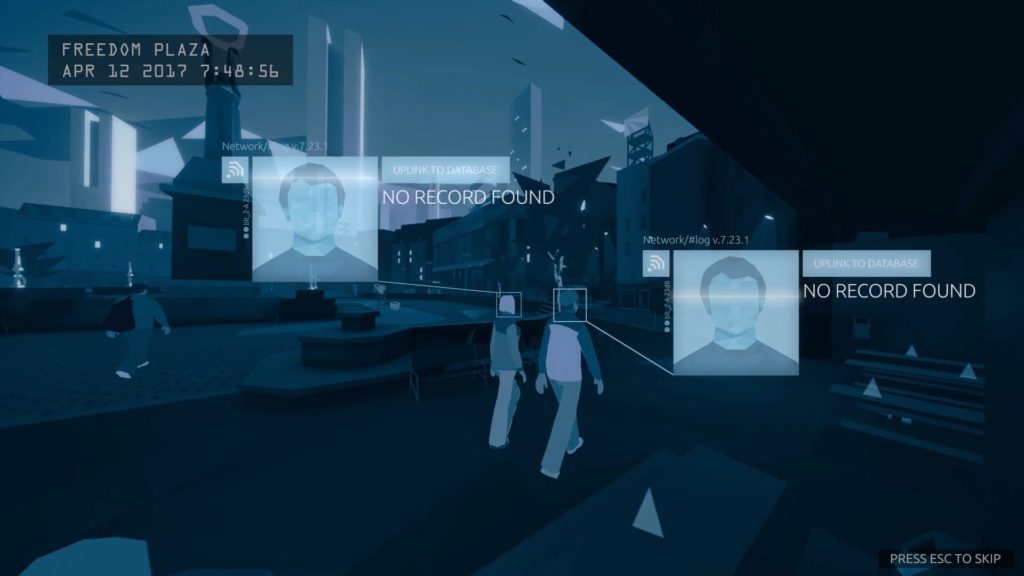 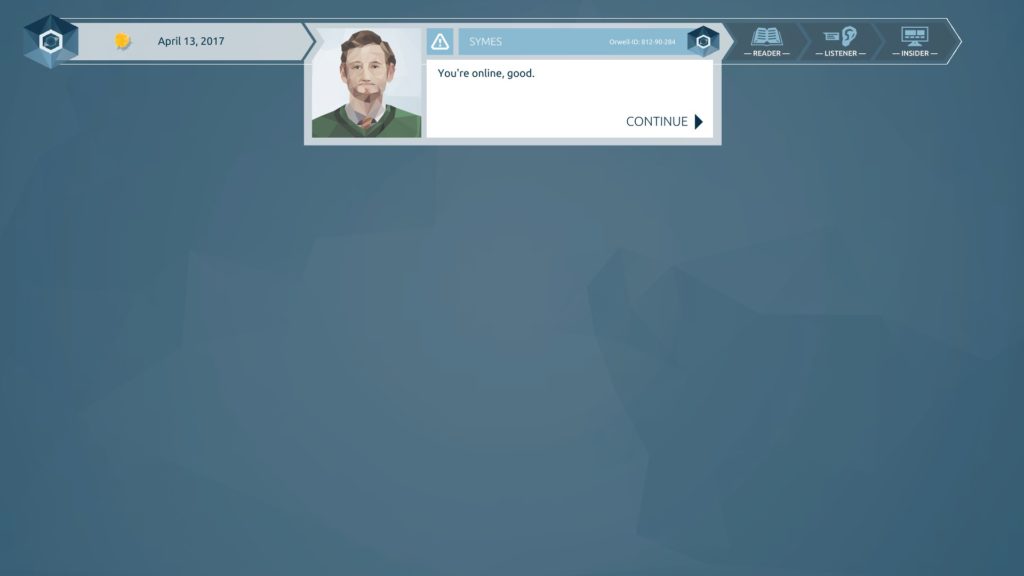 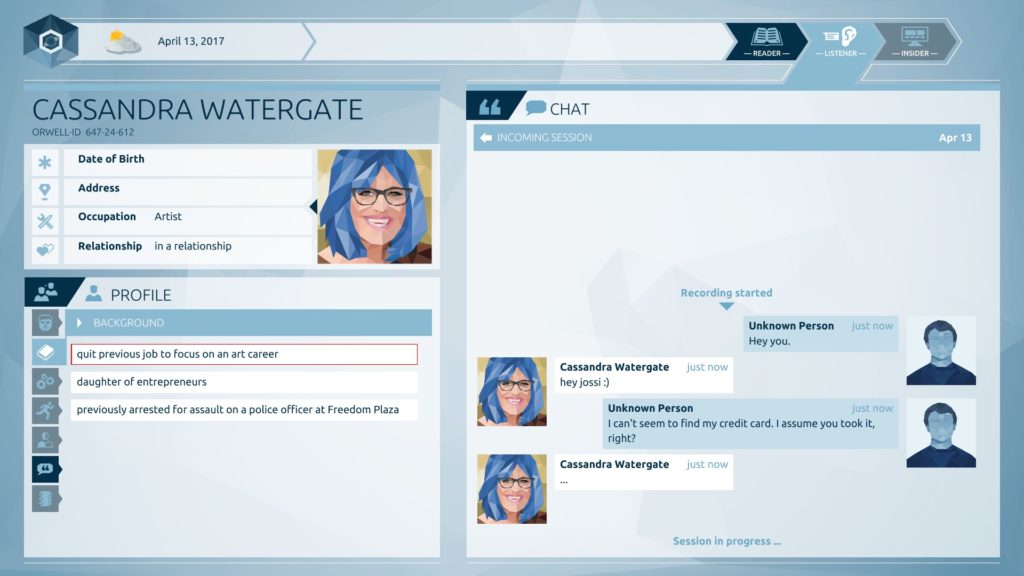 So, obviously narrative games are designed to take you on our verbal journey. The narrative elements are what the game is based on and the reason why a player is going to feel connected to the game.

In Orwell, the narration led me on a wild ride. I didn’t know what to expect out of this game, to be 100% honest, but it delivered – and then some.

Because your only direct communication is with your handler, Symes, and the rest of your information is received through newspapers, articles, websites, and reports, and listening in on conversations, you’re having to infer a lot of what’s going on.

That’s why having a strong dialogue driven story is imperative to making a game like Orwell successful. You need to make educated decisions… decisions that have lasting impacts on what happens to the outcome of the game.

And Orwell succeeds in creating a sense of danger, an emergency scenario. I can honestly say that I was feeling like every second, and every decision I made, was so vitally important.  Because to the citizens being surveilled by Orwell, they were. I was controlling their lives, in a sense. In a completely different way than any other video game I’ve played before.

Okay, I don’t have this kind of control over anything in my actual real life. (And no, my World of Warcraft character doesn’t count!)

But I can with certainty say that Orwell has made me think about my actions in a way that few things ever have before. Especially in our current political climate – the world is a really scary place to be right now! – our actions are speaking louder than our words.

Orwell: Keeping an Eye on You reminds the player that nothing they do is completely free from someone else. There is a real threat of spyware on computers, webcams turning on, Google listening to your conversations (and then giving you targeted ads – hands up, you too?).

Surveillance is a near constant occurrence these days, no matter how protected we think we are (thanks, smartphones!).

So playing Orwell made me think about my actions. If someone were actually keeping an eye on my activity, what impression would I be making on them? Would they suspect me of dodgy activity?

I don’t think I’d be in any real danger based on my activity… I mean, unless there’s some threat about video gamers going on right now, am I right? Haha, I’m kidding. Mostly.

But seriously, as someone who’s life mostly revolves around video games, books, and writing, I think I’m safe.

Unless they caught that one time…. 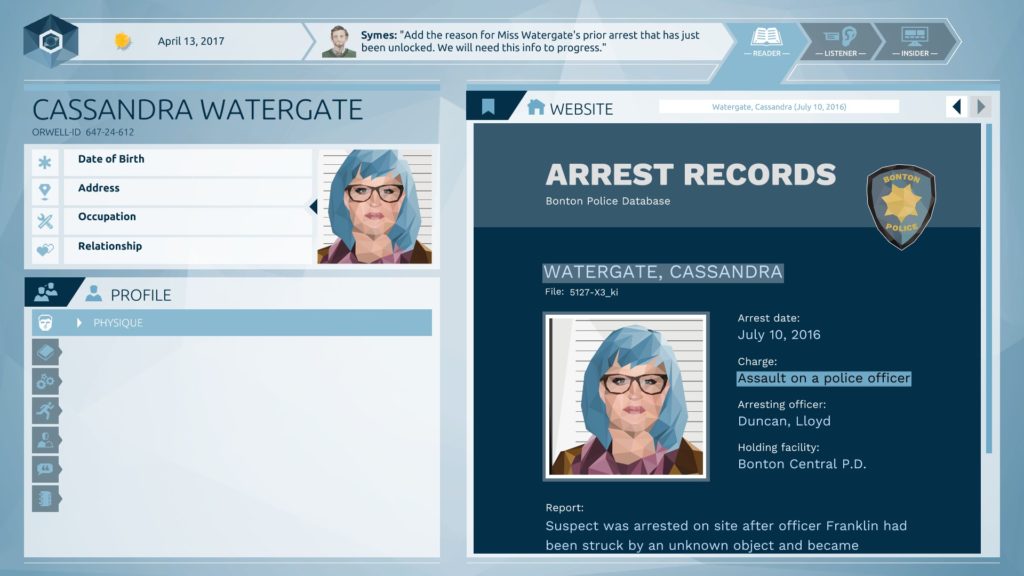 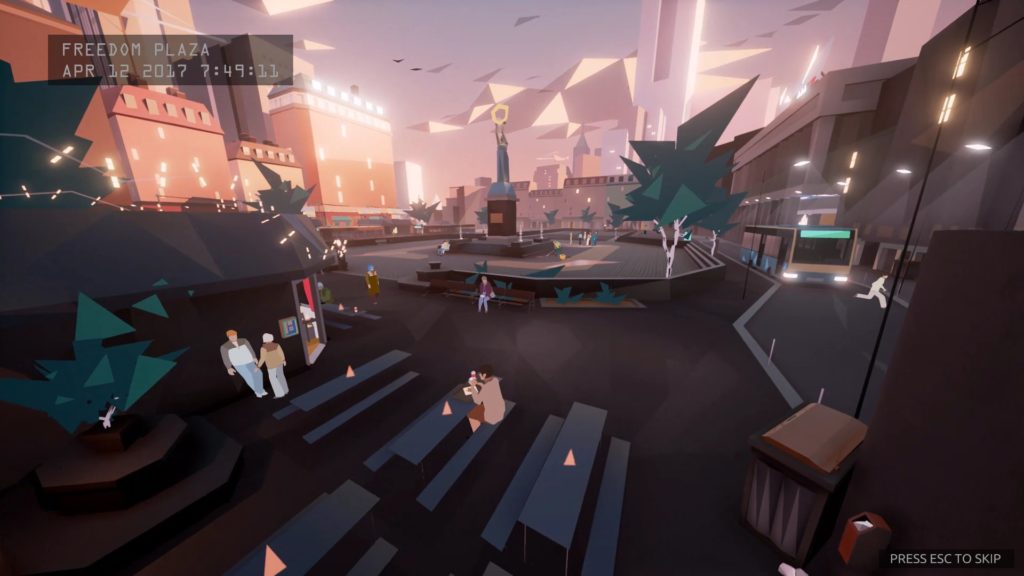 Overall Thoughts on Orwell: Keeping an Eye on You

If you haven’t played Orwell yet, why the heck not?

Seriously, this is a thought provoking game with a narrative backbone of support. I wholeheartedly recommend it.

It’s different, interesting, thrilling, and actually a wee bit scary. Imagine a game being all that when there’s no action or video or movement. It’s all down to the incredible dialogue and narration.

Yes, there’s a lot of reading.

Yes, there’s a lot of thinking – it’s the exact opposite of a platformer game.

And yes, there’s a lot of decision making involved.

But all of that makes it a game you need to play.

Can’t wait to hear what you think about it!